Back to all articles

leasing.cars is recognised as a Best Car Leasing Company by Honest John 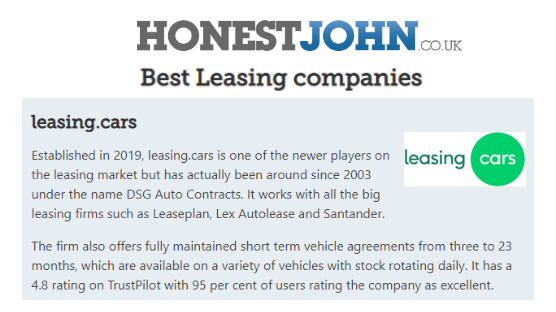 HonestJohn.co.uk was founded in 2000 and is known for its no-nonsense approach to car buying and owning advice.

They offer detailed reviews of new and used cars; have a Real MPG tool, which gives owners a real world view on fuel consumption, and they are are most famous for their Ask HJ function, where we give the readers tailored advice.  heycar acquired HonestJohn.co.uk in February 2020 and maintains the site as an independent brand to help bring greater trust and transparency to the car industry.

Back in 2003, when DSG Auto Contacts was formed, we starting working with Honest John and became a regular contributor to the forum offering the readers advice on car and van leasing.  In addition to the forum work, we also sent over details of our latest offers and these became a regular feature on the best deals section.

Over the years, we have, on several occasions, been proud to be awarded the Honest John 'Highly Approved Trader' award, the HAT Awards are awarded at Honest John’s own discretion and are to honour businesses that go the extra mile for customers.

"HAT awardees represent reliable, high quality service and excellent value for money." Editorial Director Daniel Harrison explains. "All these are qualities which HonestJohn.co.uk strives for across the motoring industry. These businesses truly deserve this recognition." 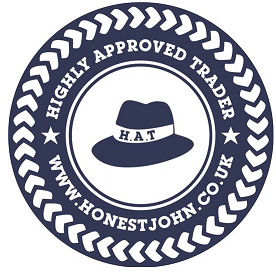 So, it is no surprise, that after all the years in the industry, we now find ourselves being recognised by the team at Honest John as one of the 'Best Leasing Companies' in the UK.  This kind of recognition supports our regular Five Star Trustpilot reviews.

If you want to deal with an award wining business with experience and integrity, feel free to get in touch.

No preferences have been set so the site will show best pricing.

Search for your dream car